“The history of 800 years, continues from the age of Genpei”

The plateau of altitude 325m, the ruins of Oka Castle, its area is 1million ㎡, its area is equal to 22 Tokyo domes(46,755㎡). Built on the plateau like tongue where the branch of Ono river, Inaba river and Shirataki river meet, the figure soaring up from the riverbank makes us feel that it used to be called the natural fortress called as “Impregnable”. The Oka Castle is said to be built in 1185, though attacked many times in the battles and fire, it continued to exist in the area of Taketa until the year 1871 when the order of the exclusion of the castles was issued. Still now, the stone walls are rising to show us how flourished it was in those days. 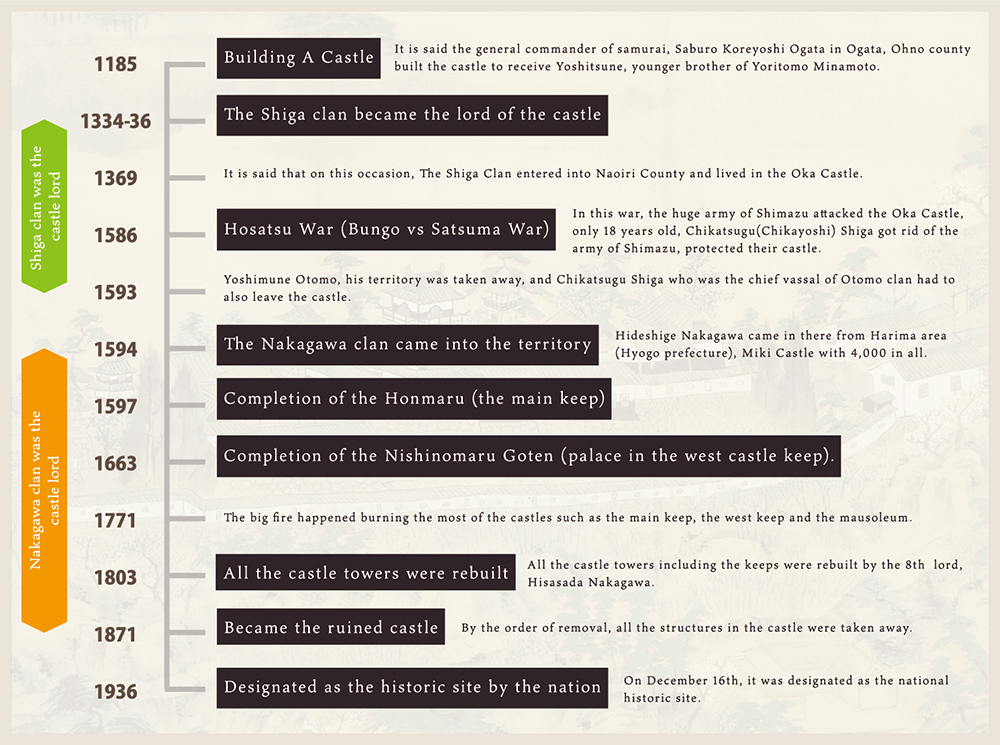 Monument of Yoshitsune
1185 (文治元年)
Building A Castle
It is said the general commander of samurai, Saburo Koreyoshi Ogata in Ogata, Ohno county built the castle to receive Yoshitsune, younger brother of Yoritomo Minamoto. And they had severe quarrel. Koreyoshi was caught when he was trying to put out to the sea of Daijiura(Hyogo prefecture), and next year sent into exile to Numata of Ueno area (Gunma prefecture).
1369 (応安2年)
The Shiga clan became the lord of the castle
Sadatomo Shiga, branch family of the Otomo clan, the military governor living in Minamigata, Shiga village of Ono was given the order by the Emperor Godaigo, and was said to repair the Oka Castle and fought with The North Imperial Court. This Sadatomo Shiga is said to name “The Oka Castle”.
Riverbank of Shirataki River
1586 (天正14年)
Hosatsu War (Bungo vs Satsuma War)
In this war, the huge army of Shimazu attacked the Oka Castle, only 18 years old, Chikatsugu(Chikayoshi) Shiga got rid of the army of Shimazu, protected their castle and was given the letter of acknowledgement from Hideyoshi Toyotomi. The army of the Shimazu attacked three times, however Shinzen destroyed them completely, and as an “Impregnable Castle”, the name of Oka Castle gained a nationwide reputation.
Portrait of Hidenari Nakagawa
1593 (文禄2年)
The Shiga clan left the Oka Castle
The Nakagawa clan came into the territory
Yoshimune Otomo, his territory was taken away, and Chikatsugu Shiga who was the chief vassal of Otomo clan had to also leave the castle.
Hideshige Nakagawa came in there from Harima area (Hyogo prefecture), Miki Castle with 4,000 in all. They repaired the castle, then arranged the castle of early modern times.
Oka Castle picture scroll (near Honmaru)
1596 (慶長元年)
Okagi general contract fulfilled
At the same time as Mr. Nakagawa joined, Oka Castle of Shiga era will be renovated into a castle of all Ishigaki. Bunroku 3 (1594)-Keicho 1st year (1596), the general contract was carried out, and the main curving rings including the Honmaru, the entrance to the Otemon gate, etc. were completed.
Oka Castle picture scroll (Nishino-maru)
1664 (寛文4年)
Completion of the Nishinomaru Goten (palace in the west castle keep).
In the beginning, the Nishinomaru Goten was the place for the old retiree of Hisakiyo Nakagawa who was the third load. However it was additionally constructed and became the central part of the castle. Consist of mountainous housing (the main keep, the second keep, the third keep), a castle on the flat area (the west keep) becoming one which makes a peculiar castle in the history of the castle in the early modern times.
1771 (明和8年)
Most of the castles have been lost in the fire
The big fire happened burning the most of the castles such as the main keep, the west keep and the mausoleum. In 1779, (Anei 8) the Nishinomaru Goten was rebuilt, after that it became the center of the politics.
Old photos of the Meiji era
1874 (明治7年)
Became the ruined castle
14 lords continued by the Nakagawa clan. They moved to Tokyo. By the order of removal, all the structures in the castle were taken away.
Statue of Rentaro Taki
1901 (明治34年)
"The Moon Over The Ruined Castle” was composed by Rentaro Taki.
It is said Rentaro Taki who spent his boyhood in Taketa got the impression while playing around climbing up to the castle composed the song “The Moon Over The Ruined Castle”
1936 (昭和11年)
Designated as the historic site by the nation
On December 16th, it was designated as the national historic site.
← 一覧ページに戻る